When Photography Stole My Soul

When Photography Stole My Soul

Choosing elective courses in high school was a soduku challenge at my house; I was allowed to take music class, since I had been playing the trombone since the sixth grade–yes, a band geek. But I couldn’t take classes like pottery, jewelry making, home ec or the like; they weren’t serious or educational enough, or something like that…Man I really really wanted to take pottery; still do, and don’t have a good reason why I haven’t yet.

Anyway, photography was in the catalog for my sophomore year, and fit into my schedule, so I signed up and got the green light from the parental units.

We spent weeks learning about lab safety, the principles of composition: leading lines, repetition, rule of thirds, yada yada. By the fourth week in class, I was losing hope we would ever actually hold a camera.  When were we  going to get down to the nitty gritty?!

Finally Ms McArthur announced we would be taking photos and handed out the assignment sheet. The paper said: “Make a Pinhole Camera”. What?!  We were going to have to make the camera. I didn’t consider myself very crafty, and honestly, I’ve only improved my craft skills marginally since high school, so I was sure I would fail this assignment and never ever get to hold the coveted Pentax K-1000.

We brought in Quaker Oatmeal tubs, treated the inside with black spray paint, cut a flap in what used to be the bottom of the tub and covered the opening with tinfoil, which we poked with a pin, hence the “pinhole” part of the camera. We all finally made it to the darkroom and taped a piece of photo paper to the opposite end of the tub and closed them up. 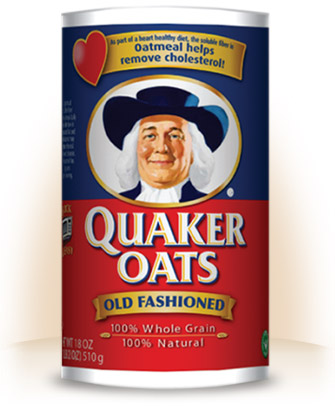 Instructions were to find a spot outside, lift the flap and wait about twenty minutes, then bring the tub back to the darkroom to develop the paper. I chose the bench outside the classroom, and as I sat there I questioned my judgment in choosing the class. It was a lot more complicated than I thought it would be: figuring out what to shoot, how to compose it, all the things to keep track of in the darkroom, chemistry, and on and on…I thought it was going to be an easy class!

In the darkroom, I slipped the paper into the developer bath and watched the lines from the bench appear, the trees, the school hallway and I was mesmerized. 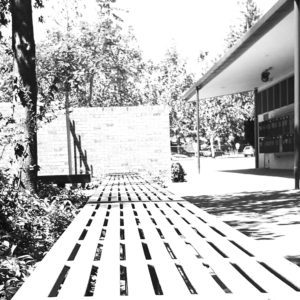 I couldn’t believe that 1/ I was able to make a camera 2/ choose a cool spot to shoot 3/ develop it without screwing it up and 4/ that this choice, made on a whim, was to become an obsession. It was as if the art of photography reached out of that tray and grabbed me by the throat and whispered, “You’re mine.”  It’s all I wanted to do after that day.